You are here: Home/News/Article/Ethiopia: Traditional weavers to weave their way into international market

Ethiopia: Traditional weavers to weave their way into international market 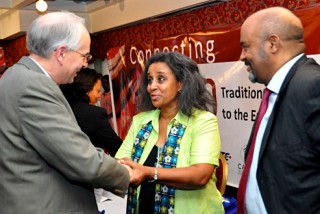 Traditional weavers in Addis Abeba are to receive traditional weaving and design training starting this June to help them produce exportable products.

Benefiting from a 3.8 million Br injection from the USAID’s Competitiveness and Trade Expansion Program (COMPETE), the project brings together the Centre for African Women Economic Empowerment (CAWEE), as project owner, and two companies owned by Sara Abera, Sara Garment Designers and Manufacturers (SGDM) and Muya Abyssinia Craft, as project implementers. The total project cost is 6.3 million Br, with the balance contributed by CAWEE, SGDM and Muya. USAID’s financial support to this project is part of its 8.4 million dollars food security support to COMESA countries.

Sara will provide the training beginning June 2012, at Alem Gena town, in the outskirts of Addis Abeba, in the Oromia Special Zone at a centre established there. The town is selected because of the presence of many weavers in the area, who have moved in from the Southern Regional State.

The training will be conducted in two phases, from June through August and September through November. The project has already spent three months in preparation, according to Nigst Haile, CAWEE’s Executive Director. The training will be given by the curriculum that has been prepared in English and Amharic by SGDM.

Founded in 2004, by one of the promoters and board members of Enat Bank, Nigest Haile, CAWEE says it works to promote women entrepreneurs with a special focus to women exporters through African Growth Opportunity Act (AGOA). It also gives technical trainings to women organized in Micro and Small Scale businesses.

The training program is mainly part of CAWEE’s plan of engaging qualified weavers with the capacity to produce export focused products. Its new project, launched as ‘Connecting 100 Traditional Weavers to the Export Market’ on Friday, May 18, 2012, brings together 70 men and thirty women trainees.

The project has acquired 50 improved weaving looms, each worth 17,557Br, according to Steve Humphreys, COMPETE’s country representative.

Muya was established in 2005, and is the first to obtain membership in the World Fair Trade Organization, according to the company.

Muya claims that its three quarter export for the 2011/12 fiscal year was second only to Ayka Addis Textile Group, the largest textile factory in Ethiopia. But they did not give the details.

The trainees, 18 to 35 years of age, will be selected based on their knowledge and experience, according to Sara.

The project aims to increase the incomes of the trainees by 75pc, increase the capacities of SGDM and Muya, as well as increasing Muya’s sales by 20pc because of the project.

AGOA provides and expands market access for textile and apparel goods with quota and duty-free entry into the US for eligible countries, including Ethiopia. However, out of the 144.4 million dollars of Ethiopia’s exports, only 13.9 million dollars were earned through AGOA, according to AGOA’s report in 2011. This is lower than that of Kenya’s 292.6 million dollars, out of a total of 380.5 million dollars.

The government plans to achieve export revenue of one billion dollars of textile and garment, including weaving products, export in 2015.

You are here: Home/News/Article/Ethiopia: Traditional weavers to weave their way into international market