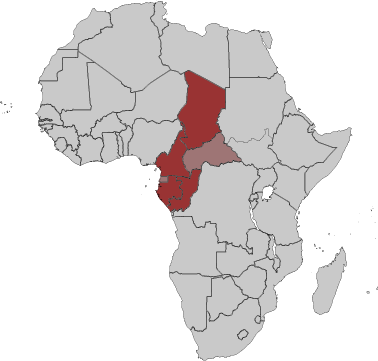 In theory, tariffs have been eliminated on trade within CEMAC, but full implementation of this has been delayed meaning that the objectives of a full customs union have not yet been met.

The treaty which established CEMAC in its current state was signed on March 16, 1994, in N'djamena (Chad).  It replaced the treaty establishing the Customs and Economic Union of Central Africa (UDEAC), signed on December 8, 1964, in Brazzaville. (Sources: CEMAC Secretariat and Wikipedia)

Of the CEMAC member states, only Cameroon, Congo (Brazzaville), Gabon and Chad are AGOA beneficiaries. Their trade data is included in the US-CEMAC trade table alongside.

CEMAC Countries Establish Framework for Trade With US

Countries in the CEMAC zone have drawn up national plans that would enable them increase their agricultural exports to the United States under the Africa Growth and Opportunity Act, AGOA. The CEMAC zone countries drew up the plans during a three-day "Public/Private Sector Forum on SPS (Sanitary and Phytosanitary issues) and Trade" organised by the United States Department of Agriculture, USDA.   The plans are related to Sanitary and...