You are here: Home/About AGOA/AGOA and US Trade Remedies

While the benefits of international trade are undisputed, trade flows can also have disruptive impacts on local businesses and industries. When government subsidies in a foreign trade partner, or unfair pricing by an exporter, result in adverse impacts on businesses, workers or consumers in the importing country, legislation can be used to provide a measure of protection to local industry, usually in the form of tariffs.

What are subsidies and how can they impact my exports to the US?

What is the dumping margin? What are subject goods?

How is an anti-dumping investigation initiated?

What are the potential outcomes of an anti-dumping investigation?

What are the timelines for an anti-dumping investigation by US authorities?

Video: Anti-dumping and countervailing duty counselling by the US Department of Commerce

While it may not make much sense to sell goods at less than fair value (or below production cost) on the export market, there are situations where this may be an inadvertent or even deliberate outcome to exporting.

Legislation allows governments to provide certain trade remedies to mitigate the impact of such unfair pricing or subsidies, given the damage that such trade can have on local businesses. Trade remedies can be used to address each of the three main types of activities that injure (or threaten to injure) local industries; these being anti-dumping (in response to selling at less than fair value), countervailing measures (in response to government subsidies in the export market) and safeguards (in response to a surge in imports that causes harm to local firms).

Why are these issues important and how do they link to AGOA?

The short answer for this is that while AGOA provides exporters in Sub-Saharan African beneficiary countries with unprecedented duty-free access to the US market, the legislation does not provide a waiver from any other trade-related obligations, and exports to the US market will always be subject to compliance with US trade laws. If exports do not comply, US authorities can be petitioned to invoke measures to address situations of unfair trade and the resultant injury to local industries.

An adverse finding relating to any of the three core trade remedy categories could therefore have serious consequences for exports (and exporters) to the United States, irrespective of the product’s origin, or its eligibility for trade preferences.

It is also important to note that African exporters under AGOA can likewise be negatively impacted by subsidies and unfair pricing by exporters to the US in other countries, for example in Europe or Asia, as this makes it more difficult for African exporters to compete on the US market notwithstanding AGOA preferences.

This section provides a brief overview of US trade remedies so that traders are familiar with some of their key aspects, especially in terms of anti-dumping legislation, and the available action that may be taken against such export goods.

US trade remedy legislation is contained within the Tariff Act of 1930 (as amended). Also see this link to the relevant legal provisions.

Dumping is classified as the sale of goods in a foreign market at less than fair value (LTFV), which happens when a product is sold at less than the cost of producing it, or is sold at a price that is lower than what the product would be sold by the exporter on the domestic (local) market of the home country.

Dumping relates to the conduct of businesses or exporters, and any anti-dumping action would be taken against the exports by particular companies in specific countries, rather than necessarily the exports from the country as a whole, usually through the imposition of punitive import duties. A product found to be subject to anti-dumping would then be subject to punitive tariffs, even if it were otherwise duty-free, such as under AGOA.

Sometimes governments subsidise local industries in order to benefit production levels or to encourage exports. These support measures can take on different forms but involve a financial contribution to specific enterprises or industries, and confers an income or price support benefit. While certain subsidies may generally be considered illegal (for example, subsidies that are conditional on certain export performance), broader subsidies to industries can also be actionable and result in action taken by the importing country (usually in the form of additional duties on imports from that country).

The amount of subsidies the foreign producer receives from the government is the basis for the subsidy rate by which the subsidy would be offset, or “countervailed,” through higher import duties.

These are emergency measures that may be taken by countries in order to protect local industries from a surge in imports that causes injury to local industries producing like products. Safeguard measures may involve quotas and duties and would generally apply on a time-bound basis to all imports of subject goods, without differentiating between countries.

Exporters to the US (whether making use of AGOA preferences in qualifying tariff lines, or not) should in particular be familiar with US rules around selling goods at less than fair value as this could be construed as ‘dumping’ and result in products being subject to special anti-dumping measures.

Some questions around unfair pricing and trade remedies answered:

What are subsidies and how can these result in extra duties for my exports to the US?

Subsidies are financial support measures provided by governments or a public body in another country that have the effect of reducing the cost at which businesses can export their goods to another country. When specific subsidies (subsidies to certain industries or companies and intended to provide an income or price support benefit, for example to incentivise exports) result in market distortions, countries can invoke trade remedies (impose countervailing duties) on the exports from the 'offending' country. These duties or quantitative restrictions need not only be against the industry benefiting from illegal subsidies, but can also be applied against exports from other sectors from that country. Support measures provided by governments that are commonly and widely available to industries would not necessarily be subjected to countervailing measures in the importing country.

What is the dumping margin?

What are subject goods?

Subject goods are those goods classified under specific tariff codes and imported from one (or more) specific countries that form the subject of an anti-dumping investigation. The investigation will also determine a period of investigation, which is the time period being assessed for purposes of investigating the alleged dumping of products, and the causal injury to a domestic industry.

How is an anti-dumping investigation initiated?

A US company may petition the US Department of Commerce (DOC) and the US International Trade Commission (USITC) to conduct an anti-dumping investigation. The Department of Commerce may also self-initiate an investigation. Such a petition must be legally sufficient, which means that it needs to meet certain minimum standards (inter alia in terms of substance, including evidence that the industry is injured and the magnitude of the dumping margin), and it must be filed on behalf of an industry. This condition is met when a petition is supported by producers or workers representing at least 25% of domestic production of the like product, along with additional criteria.

See a related article: South African lemon juice producers may be slapped with anti-dumping duties, if a petition in the US succeeds

What are the potential outcomes of an anti-dumping investigation?

A petition that is found to be legally sufficient would trigger an investigation, which includes fact-finding by the DOC and USITC. The first stage to be completed involves an investigation by the USITC to provisionally determine whether the local industry appears to be materially injured (or potentially injured) as a result of imports allegedly being dumped (sold at LTFV) on the local US market, by a foreign exporter. Material injury in this context is defined by the legislation as “harm which is not inconsequential, immaterial, or unimportant”.

What are the timelines for an anti-dumping investigation

The following visual representation of the key stages provides a broad overview of the timelines involved with anti-dumping investigations. While these involve the key timelines as defined by the legislation, and the allocated number of days for each stage from the date that the petition is submitted, the DOC investigations (preliminary and final) may be extended. This ultimately also extends the timing of the other stages of the investigation, and final outcome. A graphic at the bottom of this page provides a more detailed flowchart of the different stages and timelines.

For further information on United States trade remedies and how exports to the US can potentially be impacted if unfairly competing on the US market, follow the links to the following further resources:

US Department of Commerce (DOC) 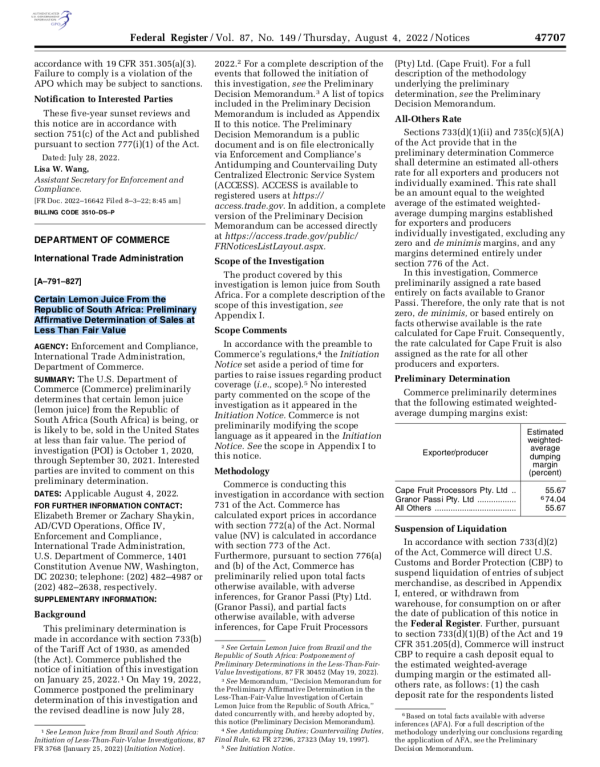 SUMMARY: The U.S. Department of Commerce (Commerce) preliminarily determines that certain lemon juice (lemon juice) from the Republic of South Africa (South Africa) is being, or is likely to be, sold in the United States at less than fair value. The period of investigation (POI) is October 1, 2020, through September 30, 2021. Interested parties are invited to comment on this preliminary determination. DATES: Applicable August 4, 2022. 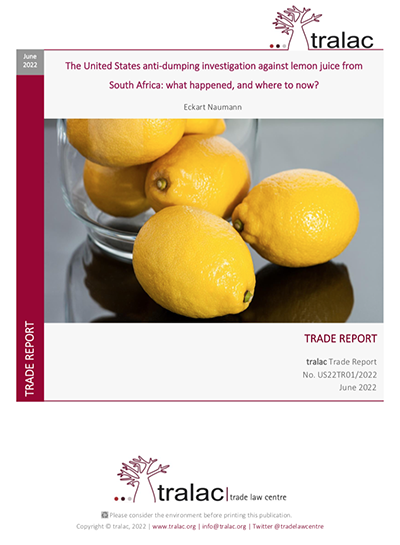 The United States anti-dumping investigation against lemon juice from South Africa: what happened, and where to now?

On 30 December 2021, a California-based producer of lemon juice and other related products (Ventura Coastal LLC) petitioned the U.S. Department of Commerce and U.S. International Trade Commission (USITC), alleging that producers in South Africa and Brazil were selling lemon juice to U.S. importers at less than fair value (LTFV). The petition requested that punitive anti-dumping duties be levied on imports into the U.S. of such products sourced... 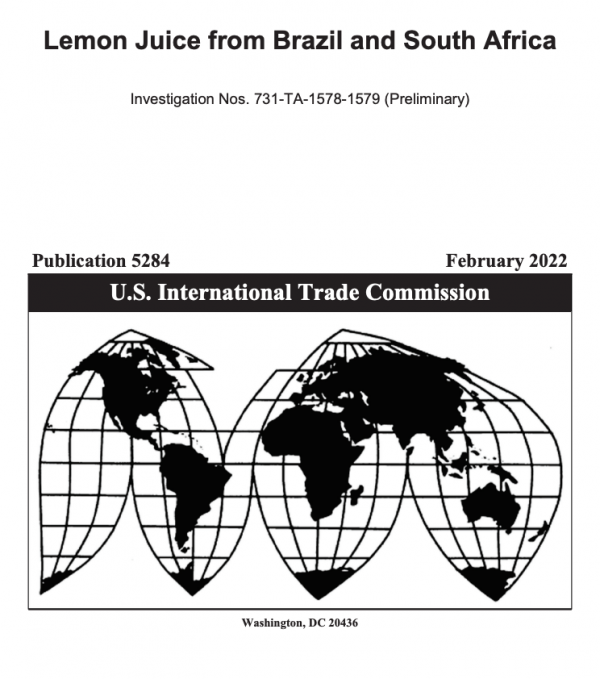 Summary determination: On the basis of the record developed in the subject investigations, the United States International Trade Commission (“Commission”) determines, pursuant to the Tariff Act of 1930 (“the Act”), that there is a reasonable indication that an industry in the United States is materially injured by reason of imports of lemon juice from Brazil and South Africa, provided for in subheadings 2009.31.40, 2009.31.60, and... 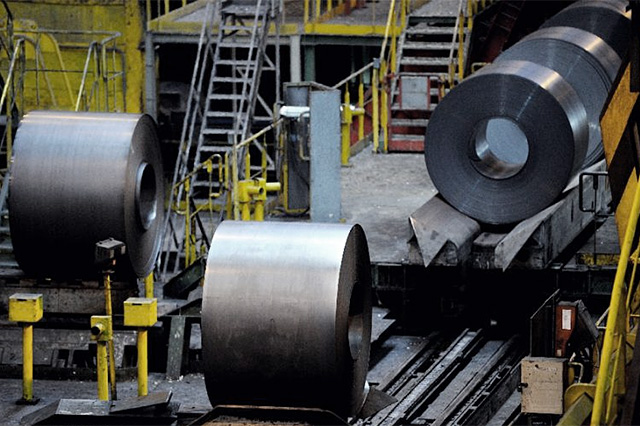 You are here: Home/About AGOA/AGOA and US Trade Remedies