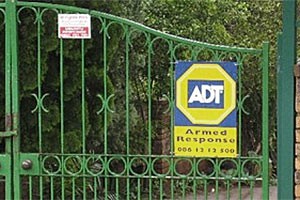 South Africa can expect challenges to legislation that would limit foreign ownership of private security companies, Trade and Industry Minister Rob Davies said, days after the U.S. warned the bill may affect the country’s inclusion in a preferential trade agreement.

“The law is sitting with the president,” Davies said in Johannesburg on Friday. “We do think that we must expect there will be a challenge if the bill goes through in its current form.”

Section 20 of the Private Security Industry Regulation Amendment Bill would require all security companies and manufacturers, importers and distributors of security equipment to be at least 51 percent owned by South Africans. Opponents of the bill say it would violate the World Trade Organization’s General Agreement on Trade in Services and the requirements of the U.S. African Growth and Opportunity Act because it would effectively result in expropriation and limit foreign investment.

The U.S. is reviewing South Africa’s status as a full beneficiary of AGOA, as the preferential trade accord is known, potentially risking as much as $1.7 billion of exports a year.

“South Africa still needs to take concrete steps to eliminate barriers to U.S. trade and investment,” the American embassy in Pretoria said in a Twitter post on Oct. 7. Removing section 20 from the private security bill “would address all U.S. concerns,” it said.

If enacted, it could result in foreign private security firms leaving South Africa completely because they probably won’t operate in a country where they don’t have full control of their business, Costa Diavastos, Executive Director of the Security Industry Alliance, an industry body, told reporters in Johannesburg on Oct. 6.

The private security industry has mushroomed in Africa’s second-largest economy as the police battle to tackle rampant crime. The murder rate increased for a third consecutive year in the 12 months through March to 33 per 100,000 people, while attempted murders climbed by 3.2 percent, latest police data shows.

About 446,000 registered security guards operate in South Africa, compared with 270,000 police officers and soldiers, according to the government. Companies protect households and businesses by linking to alarm systems. The government’s concerns that foreign-owned companies threaten national security are unfounded, Diavastos said.

The security bill won’t be decisive in determining whether South African can continue to benefit from AGOA because the review is based on the issue of beef, pork and poultry access, Davies said.

“If the private security bill is signed into law, AGOA is the least of our problems,” Catherine Grant Makokera, a senior associate at Pretoria-based Tutwa Consulting, said by phone on Friday. “There’s a whole lot of other things that will kick it, like the WTO obligations, claims of expropriation potentially.”

Police Minister Nkosinathi Nhleko said in March that the government will withdraw from the WTO’s GATS while it negotiates the planned ownership curbs and any “necessary compensatory adjustment” with other signatories to the accord.