You are here: Home/News/Article/Mercedes-Benz optimistic about South Africa 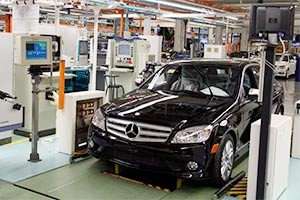 The C-Class is an icon in the South African luxury vehicle market. It has been two decades since the first C-Class was manufactured locally and next year Mercedes-Benz South Africa (MBSA) will start production on the latest C-Class model, the W205.

Last year MBSA manufactured more than 60 000 units of the W204 C-Class – of which three out of every four units was exported to the United States – under the existing African Growth and Opportunity Act (Agoa).

Agoa was extended from end of 2008 until 2015, but long-term concerns about South Africa’s involvement will remain. For MBSA this is not a direct and immediate threat as the new C-Class will be exported to different markets and not to the United States anymore.

A new model has a production life of around seven years. This means that parent company Daimler AG showed its commitment to South Africa by giving the contract for the W205 production to MBSA.

Dr Martin Zimmerman, CEO and president of MBSA, said that the company is already working on what happens post-2020. He said that it is actively engaging with possible suppliers to ensure these local suppliers also extend their customer base to include export markets. The uncertainty around Agoa could impact these initiatives.

Arno van der Merwe, vice-president for manufacturing at MBSA, said that current decision-making processes with parent company Daimler AG is not being overshadowed by some of the negative events that hit the country last year. This includes South Africa’s sovereign long-term foreign currency issuer rating being downgraded by all three major credit ratings agencies – the first time to be downgraded since the democratic elections in 1994. Labour strife was also in the spotlight with the tragic events at Marikana and subsequent wildcat strikes at other mines.

“The world is a complicated place at the moment - it is not just South Africa,” Van der Merwe said during a press briefing on the company’s 2012 results in East London on Tuesday.

“In my experience the driving force (for long-term decision making) is the underlying fundamentals,” he said, referencing the infrastructure development and the National Development Plan. “There is also a lot of good news. Still it is important that we pull together,” he said.

In 2012 MBSA invested more than R1.5bn and this year it will do the same, mostly going toward the preparation for the new C-Class. Approximately 800 people are being trained, with 600 going to work on the production of the new model and the other 200 deployed to suppliers. For the 800 positions, MBSA received 25 000 applications.

Zimmerman said that MBSA often brings colleagues from the global company to visit the plant in East London. “It gives a different perspective,” he said, in contrast to the picture from afar that might sometimes be frightening.

Mercedes-Benz is planning a model offensive this year with many new models coming to the country, including the new A-Class that will be launched locally in April.

Last year Mercedes-Benz sold 22 561 passenger cars, compared with 24 487 in 2011. Zimmerman indicated that the lower sales could be ascribed to the fact that the company could not live up to the demand worldwide. He said the performance was unfortunately affected by the low availability of stock of the new M-Class and B-Class, coupled with the complete run-out of the A-Class during the middle of 2012.

Kobus van Zyl, Vice President Commercial Vehicles at MBSA, said that it still has not received news on when the regulations proposed under the new Automotive Production and Development Plan (APDP) for commercial vehicles will be made public, but that MBSA is engaging in the process.

You are here: Home/News/Article/Mercedes-Benz optimistic about South Africa