You are here: Home/News/Article/Tough US quality checks lock out Kenya flowers 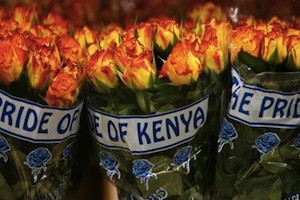 High cost of transport and stringent quality standards have locked out most of Kenya's fresh produce from the American market in spite of the decade old preferential export window extended to African countries, market players say.

Flowers, vegetables, and fruits are allowed duty-free access to the US market under the African Growth and Opportunity Act (Agoa), but market players said high cost of getting their goods to the market has confined them to Europe.

Kenyan exporters said the US was a “volumes” (mass) market whose buyers place orders in several tonnes but for along time, major airlines charged higher freight rates of Sh320 ($4) per kilogramme (Sh320,000 per tonne of fresh produce exported).

The hope for a direct air link with US floundered in 2009 when Delta Airlines suspended its much publicised launch of a direct flight.

“We have the capacity to dominate US market but most local farms still prefer Europe because the high cost of freight to US leaves them with overpriced produce that can hardly compete against those from southern America,” said Mr Ruli Tsakiris, administration director at the Oserian Development Company.

Statistics prepared by Horticultural Crops Development Authority indicates that Europe still accounts for 80 per cent of Kenya’s fresh produce market compared to about five per cent that end up in US.

“To get flowers from Kenya to US, an exporter has to pass through Europe and most of them find it convenient to sell their perishable stuff there rather than board connecting flight to US,” said Mr Tsakiris whose company is famed as one of the two top growers and exporters of flowers in Kenya.

The 37 Agoa-eligible countries are set to meet next month in Lusaka, Zambia for the Agoa Forum 2011 to review the progress of the free trade instrument in fostering economic growth in Africa.

The Forum is held annually and hosted on rotation basis between US and the eligible African countries.

Zambia is now set to become the fifth African country to host it after Kenya, Ghana, Senegal and Mauritius in that order

“In the last 10 years, no single fruit has been cleared to sell in America. They have only managed to clear three kinds of vegetables – baby corns, baby carrots and shelled beans – while all others are stilled locked out by phyto-sanitary controls,” said Dr Stephen Mbithi, Chief Executive of the Fresh Produce Export Association of Kenya

According to US’s official website on Agoa, Kenya has used the export window to emerge as one of the world’s top exporters of cut flowers to the United States with Ethiopia as the number one exporter of millet.

You are here: Home/News/Article/Tough US quality checks lock out Kenya flowers