You are here: Home/News/Article/Kenyan farmers reap gloom from American market 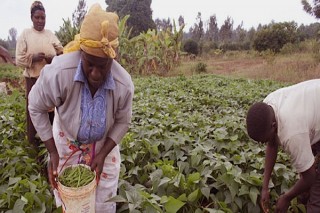 Sometime in 2004, some 'agents' promised Rift Valley farmers a fortune if they turned to 'more lucrative cash crops' which would be exported to America.

French beans dominated the list of the new cash crops.

To the small-scale pyrethrum farmers, the campaign came as a godsend. One of extraction plants belonging to the Pyrethrum Board of Kenya had just burnt down, leaving them with no alternative market.

But the ‘good deal’ would be unravelled only after three months.

The produce was ready but the agents had apparently taken off, probably on realising the beans would not enter the US market as promised. By the time the US Department of Agriculture (USDA) completed the process of clearing the shelled beans to start trading early this year, most farmers had dropped the business altogether.

Such has been one of the most noticeable challenges of the America’s African Growth Opportunity Act (Agoa) — a duty- and quota-free platform granted to 40 African nations.

While most of the 6,500 product lines that Kenya is allowed to export to the US under the facility are agricultural, industry players complain that the USDA’s clearance procedure remains grindingly slow.

According an industry lobby, Fresh Produce Exporters Association of Kenya (FPEAK), USDA still clears fresh produce on a case-by-case basis, a claim that may be vindicated by the fact that only 20 items from Kenya are exported to the largest market almost a decade since the preferential trade instrument was launched by former President Bill Clinton.

For instance, according to the association’s CEO, Dr Stephen Mbithu, Kenya applied for a permit to start exporting a number of fruits and vegetables into the US several years ago but only shelled peas, baby corn and baby carrots were cleared a few months ago. Mangoes and avocados among others are still on the queue awaiting clearance.

American officials argue that quality and health concerns override their desire to increase trade volumes with the African countries under Agoa.

Mr George Aldridge, a US embassy official, says the US has moved to address the slow process of clearing agricultural goods to enter its market by seconding many plant and animal health specialists to work with local quality regulators.

“We have brought in some sanitary and phyto-sanitary (SPS) specialists to work with Kephis [Kenya Plant Health Inspectorate Services] to speed up the quality certification process,” he said.

Regional trade adviser with USAID, Stephanie Wilcock, says the organisation has also recruited many technical experts to ensure compliance with the quality requirements of the American market right from the farm level.

The idea, she adds, is to ensure that once a product has been cleared, farmers will readily comply with the standards to avoid interrupting supply orders.

However, after years of distant advocacy and whining, the eighth Agoa summit to be held in Nairobi on august 4-6 brings Mr Tom Vilsack, the US agriculture secretary, to a roundtable discussion with government officials and farmers’ bodies like FPEAK.

The US Embassy in Nairobi has confirmed that Mr Vilsack, Secretary of State Mrs Hillary Clinton and another senior US trade representative Mr Ron Kirk will be among the American delegates at the Agoa forum.

Apart from the many trade pacts that are lined up for signing between the American firms and budding local suppliers, the forum presents an opportunity for the continent’s policy makers to question some of the non-tariff barriers that have slowed down the pace of trade expansion between the local exporters and the US.

Top on the list, the continent policy shapers are expected to take Mr Vilsack to task over his Country of Origin Labelling (COOL) programme that has widely been interpreted in the continent as a protectionist move.

In March this year, USDA launched COOL, a traceability guideline that requires that selected products entering US should bear package labels specifying their country of origin, the same rules shelved by the Bush Administration over criticism that they were discriminatory.

You are here: Home/News/Article/Kenyan farmers reap gloom from American market