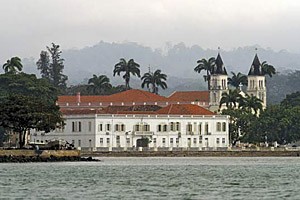 President Fradique de Menezes of São Tomé and Principe has said that "Portuguese investments have a wellspring of opportunities" in his country, where the government is working to develop a service sector catering to the oil-rich Gulf of Guinea region.

Addressing company chiefs, academics and investment specialist at “The Investor’s Guide to STP,” jointly organised by Colombia University and the STP government, at the Lisbon headquarters of Portugal’s AICEP export promotion agency, de Menezes noted the success of Portugal’s Pestana holiday group in his country.

Major offshore oil projects in São Tomé’s shared offshore development zone with Nigeria are not expected to come on-stream until 2014 at the earliest, but the islands can develop its energy sector via cooperation with nearby states like Nigeria and Equatorial Guinea that already have flourishing hydrocarbons sectors, de Menezes said.

Membership of the African Growth and Opportunity Act (AGOA) will also open up export markets in the US to São Tomé, he added.

São Tomé´s president said there is still a chance that Portuguese oil and gas company Galp, in partnership with Angolan and Brazilian firms, could be allowed to develop hydrocarbons ventures in São Tomé’s exclusive economic zone after modifications are made to the country’s oil legislation.

Alterations to São Tomé’s oil laws, permitting fast-track award of contracts without tenders, were proposed by a previous government led by Prime Minister Tomé Vera Cruz, but blocked by the then MLSTP opposition of current Prime Minster Rafael Branco.