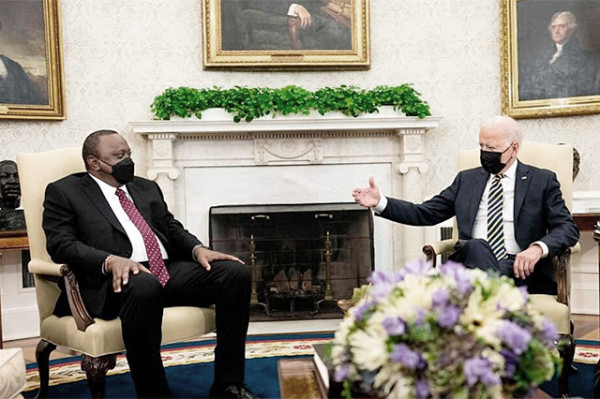 President Joe Biden’s administration is seeking views from American and Kenyan firms on the proposed fresh free trade window as it lays grounds for a new pact.

The call follows fresh trade talks Washington opened with Nairobi in July. The United States Trade Representative Office (USTR), which has been spearheading the talks, said comments received from interested parties will help the USTR as it develops negotiating objectives and positions for the agreement.

The deadline for the submission of written comments is September 16.

“The Office of the US Trade Representative is seeking public comments by September 16 that will help it develop objectives and positions for enhanced engagement and subsequent negotiation under the US-Kenya Strategic Trade and Investment Partnership,” USTR said this week in a public notice.

Firms have been asked to provide their views about general negotiating objectives on agriculture, anti-corruption, digital economy, environment and climate change, transparency and good regulatory practices, micro, small, and medium-sized enterprises, worker rights and protections and participation of women, youth, and others in the trade.

Other issues up for debate include standards collaboration, customs and trade facilitation, and other measures or practices that undermine fair market opportunities for US workers, farmers, ranchers, and businesses.

The USTR said in July that the two sides planned to begin developing within three months a detailed roadmap for engagement in these areas.

The bilateral talks — which will form the benchmark for the rest of Africa — restarted following a review of the Trump-era document.

Washington consequently launched the “rejigged” strategic trade and investment partnership with Kenya on July 14 after multiple interactions with trade officials in Nairobi.

The move followed last year’s statement by the US government that it would review the Trump-era bilateral trade negotiations with Kenya in 2020 over a potential deal.

Mr Trump and President Uhuru Kenyatta had in February 2020 announced the intention to start formal trade talks, triggering activities that were expected to culminate in a deal within two years and ahead of the August 9 General Election.

The negotiating teams are to regroup in mid-October under a new administration, which will succeed Mr Kenyatta after the August 9 polls, the Business Daily learned earlier.

The October meeting is expected to come up with a roadmap for engagement on 10 pillars, including agriculture, digital trade, action on climate change and trade facilitation and customs procedures, according to an earlier communique.

Under the new deal, Kenya is vying to become the manufacturing hub for American companies seeking to relocate or diversify out of China, Industrialisation and Trade Cabinet secretary Betty Maina said recently.

Notice and request for comments.

On July 14, 2022, the United States and Kenya launched the United States-Kenya Strategic Trade and Investment Partnership (STIP). Under this initiative the two governments will pursue enhanced engagement leading to high standard commitments in a wide range of areas with a view to increasing investment; promoting sustainable and inclusive economic growth; benefiting workers, consumers, and businesses (including micro-, small-, and medium-sized enterprises (MSMEs)); and supporting African regional economic integration. As the two governments develop a roadmap for the initial issues under that engagement, the Office of the United States Trade Representative (USTR) is seeking public comments on matters relevant to specified trade areas, including U.S. interests and priorities, in order to develop objectives and positions for enhanced engagement and subsequent negotiation.

The deadline for the submission of written comments is September 16, 2022.