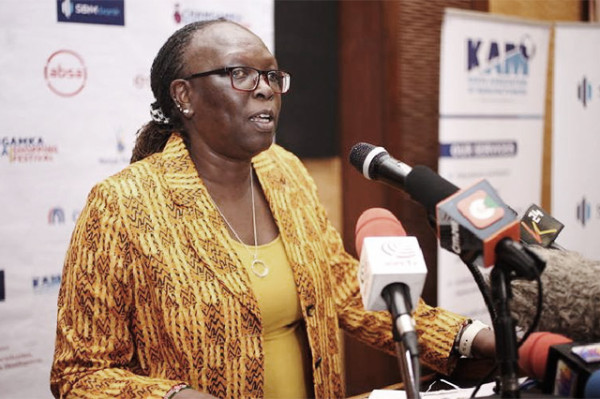 Kenya has struggled to attract long-term, capital-intensive investments under the more than two decades-Growth and Opportunity Act (Agoa) deal with the US largely because of the pact’s expiry clause, the Trade minister has said.

Betty Maina, the Industrialization and Trade secretary, says big-ticket investors have not been keen on setting up factories for duty- and mostly quota-free exports into the expansive US market, limiting the product lines to large articles of apparel.

“You don’t attract long-term investments if you don’t have a secure long-term [trade] regime.

Nobody is going to put up a factory if they don’t know whether or not they will be trading under the same terms in another 15 years,” Ms Maina said in an interview.

“It [AGOA] has attracted people that we have in Export Processing Zones doing apparel because it is a great business, but it is not capital-intensive. For example, you can pack these sewing machines in one container if you want to relocate, but nobody wants to put up a huge cement company because you can’t pack up those sort of things.”

The AGOA treaty was initially intended to last for 15 years from the year 2000 before being extended for a further 10 years which expire in September 2025.

The deal allows sub-Saharan African countries to export thousands of products to the US without tariffs.

The latest official statistics show apparel/garment firms operating in EPZs under the AGOA pact were 29 last year from 28 the year before, and 21 companies in 2017.

The capital investments by the firms grew 20.7 percent year-over-year to nearly Sh23.1 billion, according to data collated by 5he Kenya National Bureau of Statistics from the Export Processing zones.

Kenya and the US, in July, opened fresh talks over a long-term bilateral strategic trade and investment partnership after a year-and-a-half hiatus following a regime change in Washington.

The negotiating teams are expected to regroup in mid-October under a new administration which will succeed President Uhuru Kenyatta after the August 9 polls.

The October meeting is expected to come up with a roadmap for engagement on 10 pillars, including agriculture, digital trade, action on climate change, and trade facilitation and customs procedures, according to an earlier communique.

“The reason we went into these talks is because we wanted certainty post-AGOA. The US government has not given an indication yet of what will happen to AGOA post-2025,” said Ms Maina.

“There have been some different proposals, but we are not really prosecuting one publicly yet.”

The Agoa pact allows preferential access to the US for thousands of products like food and beverages, wood, plastics and rubber, but Kenya has largely tapped the apparel line.

Washington has in the past come under scrutiny for erecting non-tariff barriers such as complex regulatory regimes and quality checks which are difficult for beneficiary countries to navigate.