You are here: Home/News/Article/'South Africa sticks to protectionist policy while AGOA slips through our fingers' 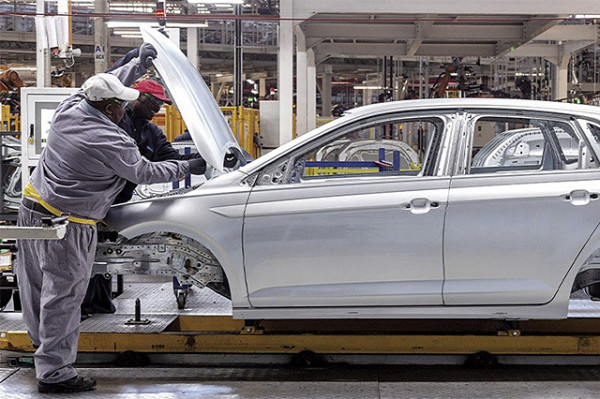 Trade between South Africa and the United States by sector

Trade between South Africa and the United States by sector

It isn’t likely that this can be avoided. But it doesn’t have to be this way.

We were never meant to benefit from AGOA, and if not for Nelson Mandela chatting with Bill Clinton in the late 1990s we never would have.

Lower import duties in the US for cars made in SA have been the most obvious reward, but exports of wine and citrus and other fruits have benefited too. However, that is now close to over and we are not doing much to plan beyond that point.

It is up to the US to extend Agoa or not, or to extend it to selected countries in Africa but not necessarily SA, perhaps especially after our failure to denounce the Russian invasion of Ukraine. The US wants a trade agreement, a give-and-take similar to what we have with the EU, but trade, industry & competition minister Ebrahim Patel will not allow that to happen.

His predecessor, Rob Davies, was rabidly opposed to this idea too. This is a measure of how poorly we implement trade agreements, rather than whether a particular trade agreement is important. 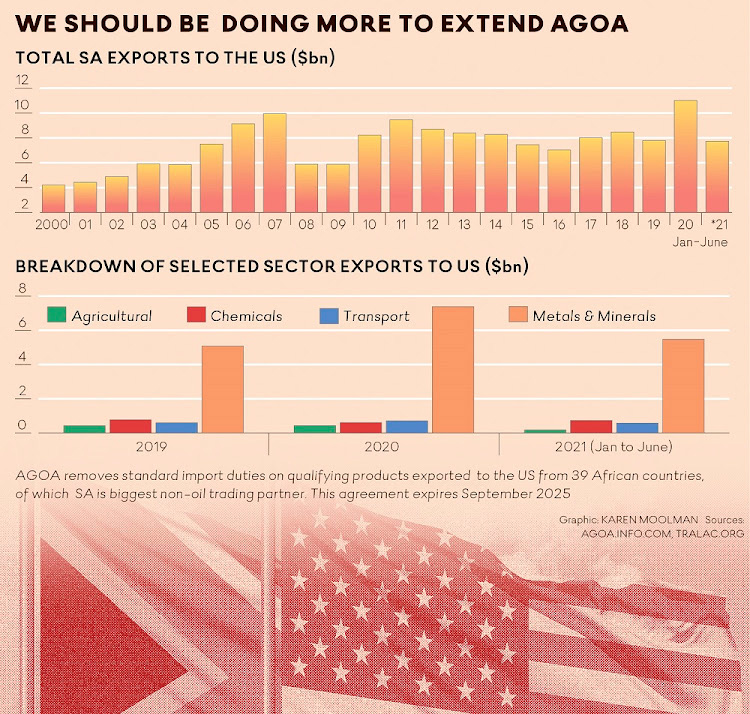 Our position now seems to be that we would rather forgo access to big economy markets than allow them to have access to ours. This is the protectionist SA the presidency of Cyril Ramaphosa has been building, or rather that he has allowed Patel to build. Kenya, on the other hand, thinks it’s a great idea and is busy negotiating a trade agreement with the US as you read this. Botswana, Eswatini, Lesotho and Namibia have developed Agoa strategies to grow their exports to the US. We haven’t.

The first Agoa expired in 2015 and was extended for 10 years. It could be extended again, and we should be doing all we can to make that happen. But why don’t we export more value and variety to the US more than 22 years into Agoa? We know the government likes Agoa, because of the white-knuckled panic in 2015 when then president Barack Obama suspended our benefits because of a dispute over US chicken. After this suspension, SA’s anti-dumping duties on chicken were rebated for 70,000 tonnes of American chicken a year.

If we lose our preferential access under Agoa, the US will also lose its exemption from anti-dumping duties on chicken, which come in at a hefty R9.40/kg. The price of chicken will rise in SA, especially if imports from the EU are still suspended because of Avian flu. And the local industry will not pick up as much of this volume as it should because we have not cracked the puzzle of exporting our chicken breast meat to the EU or anywhere else.

This saga has been dragging on since 2016, with little to show in the way of real progress. Instead, we keep selling our chicken breast domestically at the same price as we do every other part of the chicken, in a 2kg frozen pack of mixed portions. Seventy percent of local chicken is sold that way, which means we lose out on the advantage of balancing the carcass (selling each cut to the market that will pay the most for it).

Local producers will say the Europeans don’t want to allow our chicken into their market, but this is unlikely to be true. Europe has to import as much as 900,000 tonnes of breast meat a year, mostly from Brazil and Ukraine. The chicken out of Brazil attracts a duty, while chicken from SA would not. What kind of exporter turns their back on low-hanging fruit like that? A crude one.

We appear set to let the balance of Agoa slip through our fingers because we believe we are somehow entitled to this preferential access, and when we have it we feel we don’t need to do anything with it. The US has given Agoa beneficiaries preferential access to about 6,500 products, yet in 2021, 53.21% of our exports to the US were focused on just the top five tariff codes (automotive and then four precious metals).

From 2010 to 2021, our total exports to the US had risen 13%, while US imports had climbed 10.5%. In rand terms. We should be selling more agricultural products. Wine. Olive oil. Fruit. Forget about textiles and clothing — that is what many other African countries sell in volume under Agoa, but between the unions and the bargaining council, we have destroyed this industry in SA.

Of the 6,500 products accorded preferential access to the US only the SA automotive sector is doing much. In fact, the 76 SA auto sector tariff codes accounted for almost 7% of total trade under Agoa in 2021. This is a fine accomplishment, but where are the rest? About 35 products account for 57.7% of our US exports, but excluding automotive, the bulk of this value is in precious metals and minerals. This is not bad, it just doesn’t require Agoa. And it means that after 22 years, Agoa is really restricted to the automotive sector.

We have to change this, but to do that we need to shift our focus to competitiveness, and this is hard. Our industrial policies have ruined the economy. We launched the first Industrial Policy Action Plan (Ipap) in 2007, and in the intervening years per capita GDP has grown at the slowest rate since 1994. We have less industry now than when the first Ipap was released 15 years ago.

Identifying causality is a mix of black magic and magic mushrooms, but what we can say is that our industrial policies have not succeeded, even if they are not the cause of the problem. Successful industrial policies require a heavy hand (think apartheid SA, China now or South Korea in the 1960s) and subsidies. Subsidies matter because a strong protectionist focus makes for highly concentrated, uncompetitive industries. Despite the large duty preferences into the EU and US, we are still not competitive for most products.

The love child conceived on the back seat of the automotive industry is the subsidies given to the sector. Our taxes help us export cars, not our trade unions, Eskom or failing ports. We have great mining and agriculture, and if we stop scaring the miners and farmers, we would be even better. But at the aggregate level, we are not competitive.

No-one else cares about the reasons for our lack of competitiveness. No-one outside SA cares about our unemployment rate, our collapsing infrastructure, corruption, BEE, minimum wages and red tape for business, except as factors to be considered when deciding where to place their capital. They don’t care if Jacob Zuma goes to jail or if our whole economy fails. They trade with us when we offer value, and when we don’t, they don’t.

You are here: Home/News/Article/'South Africa sticks to protectionist policy while AGOA slips through our fingers'