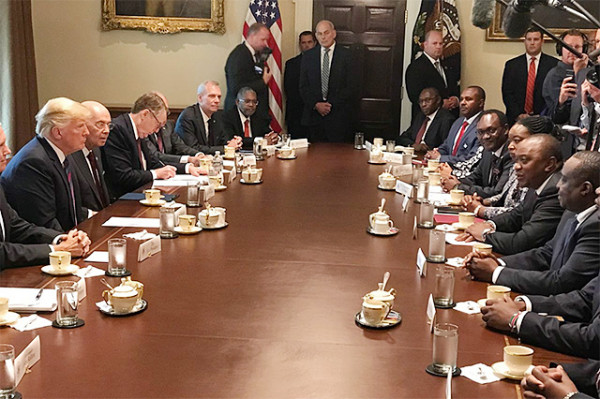 Kenya hopes to resume trade talks with the US after change of guard at the White House with President-elect Joe Biden's inauguration on Wednesday.

The country is optimistic of speedy resumption of negotiations, with hopes the Biden administration will warm up to Africa, and Kenya as an investment destination and trade partner.

The negotiations for a Free Trade Agreement (FTA) which commenced on July 8, last year,  stalled due to the Covid-19 pandemic and the recent US elections.

Talks later resumed with the first and second rounds concluded by last August but last November US elections saw negotiations put on hold to await the outcome.

The President gave the assurance when he bade farewell to outgoing US Ambassador to Kenya, Kyle McCarter, who paid him a courtesy visit at State House, Nairobi.

“We appreciate what has been achieved through AGOA, but it is time we moved to much more closer trade arrangements that are mutually beneficial. We will not lose focus on concluding the FTA,” the President said.

Kenya's Trade and Enterprise Development Cabinet Secretary Betty Maina is optimistic of a smooth continuity in the talks, as President Biden moves to name his cabinet and key administrators who will shape the US's international relations.

“We expect to get into more rounds (of negotiations) as the new administration settles,” CS Maina said in Nairobi on Monday, during the signing of a pact between Kenya Airways and the horticultural industry, to boost exports.

The Kenyan government is keen to secure a free trade pact ahead of the lapse of the African Growth and Opportunity Act (AGOA) in 2025, which eliminates import tariffs on goods from eligible African nations.

According to the CS, it could take up to two years to have a complete Free Trade Agreement with the US.

The talks were initiated by the CS and the outgoing US Trade Representative Robert Lighthizer.

In December, Biden picked House Ways and Means Committee trade lawyer Katherine Tai as the next US trade representative, subject to confirmation by the Senate.

He is yet to appoint the commissioner of the US international trade commission, with the change of leadership at the helm of key agencies expected to slow down trade and investment negotiations not only for Kenya, but other markets.

According to the CS, Kenya is keen to tap at least five per cent of the US market, which has the potential to earn the country more than Sh2 trillion in export revenues annually.

More than 70 percent of Kenya's exports to the US are duty-free under AGOA.

In 2019, the country sold about $600 million (Sh66.1 billion) worth of goods to the US, mainly textile and apparel, tea, coffee, fish products and nuts.

The US is keen to secure comprehensive market access for its agricultural goods in Kenya by reducing or eliminating tariffs.

The two countries also seek to develop rules of origin to ensure that the benefits of the agreement go to products from the United States and Kenya.

Kenya has set up a technical support team of 90 experts to help with the negotiation process.

Biden and his new administration are expected to take a multilateral approach to foreign policy which is expected to increase engagement with allies , while easing tensions such as the US-China trade wars witnessed during Trump's tenure.

Based on part of his campaign sentiments, trade issues are expected to be a top priority for the Biden administration with engagements with African countries on his cards.

During his election campaign, Biden said the US should not miss the opportunity to engage Africa’s youth, and that it should prioritise economic growth in Africa by strengthening trading relationships.

He also noted the need for empowering African women, starting urbanisation initiatives in African cities, and demonstrating the American model of democracy and economic development.