An Act, to promote access to benefits under the African Growth and Opportunity Act, and for other purposes.

Update: 8 September 2016: Received in the Senate and read twice and referred to the Committee on Foreign Relations.

This bill was originally introduced to the House of Representatives on 19 June 2015. On 8 September it was received by the Senate for consideration, and passed on to the Senate Committee on Foreign Relations. 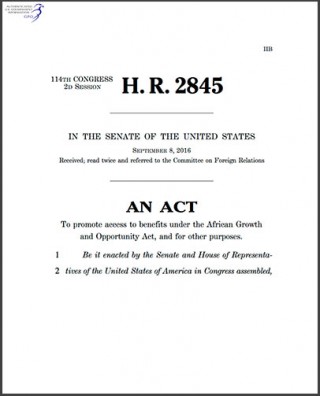 Click the image to download or view the document.
You are here: Home/Downloads/Legal Documents/H. R. 2845 - AGOA Enhancement Act of 2015