You are here: Home/News/Article/South Africa's IDC says it's 'invested R12 billion in textile and clothing industry' 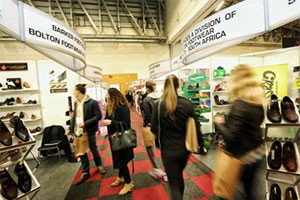 The Independent Development Corporation (IDC) says it has invested about R12 billion in the textile and clothing industry in 2015.

The IDC is one of the exhibitors at Source Africa - the annual pan-African textile, clothing and footwear trade event currently taking place in Cape Town.

The event brings together manufacturers, buyers, suppliers and service providers from across the continent, Asia and even the United States of America.

Source Africa coincides with the three day imbizo on the textile and clothing industry by the South African Clothing and Textile Workers Union.

Traders from all over the continent and further afield are under one roof in Cape Town to promote African-made textiles to international buyers and to boost trade between African countries.

In 2016 the trade show has more of an international flavour with exhibitors from China and the USA. An exhibitor from US-Aid, Finn Holm-Olsen, says investment into Africa keeps expanding.

"Four or five years ago it was really a struggle to get buyers to come to Africa. That is not a problem anymore - they are coming in their droves."

On the local front, the Independent Development Corporation says it has invested about 12-billion rand in the textile and clothing industry in the past year.

IDC spokesperson, Shakeel Meer, says the cash injection is aimed at bolstering job creation in the textile and clothing industry which has been shedding jobs.

"As a country we know that the unemployment is the biggest challenge that we've got and the only way to resolve it is by starting up new businesses."

"By expanding and we need to work with private sector to find those opportunities to identify sectors where we can grow and be competitive." He says after a difficult period, the textile industry appears to be stabilising.

"We are here to support textile and clothing in particular. We see opportunities for the industry to develop. It has stabilised and now some opportunity to grow. Source Africa has companies from the region, not only SA, opportunity to meet with some of these companies and maybe some will come to us for finance."

You are here: Home/News/Article/South Africa's IDC says it's 'invested R12 billion in textile and clothing industry'